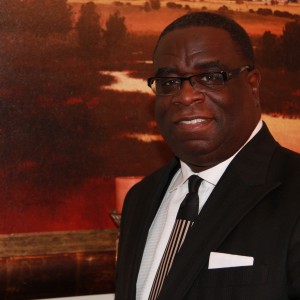 Reverend Dr. Spencer F. Isaac was born on May 2, 1961, in Washington, DC to the late Deacon Lesley D. Isaac, Sr. and the late Deaconess Corrinthius Isaac. He is the youngest of three children born to this God- fearing couple. He is married to his beautiful wife of 20 years, Barbara Isaac; and they have been blessed to raise two daughters of their own, Alexis and Stephanie. Although residents of Prince George’s County, Maryland for some years, Woodbridge, Virginia is now the place they consider home.

Reverend Isaac was ordained a deacon in 1984 at the New Mount Nebo Baptist Church in Capital Heights, Maryland. Three years later he accepted his call into the Gospel Ministry. The month of July 1987, he preached his initial sermon and was licensed to carry the Word of the Lord. In 1994 he was ordained to the Gospel Ministry at the New Mount Nebo Baptist Church, where he served as assistant to the pastor, Reverend Robert Johnson, Sr.

By God’s divine providence on August 9, 1996, he was extended the pastoral call by the New Mount Zoar Baptist Church. He graciously accepted and assumed the duties and responsibilities that come with leading God’s people on September 1, 1996. He has implemented several ministries since becoming pastor of this branch of Zion to include: Culinary/Hospitality Ministry, Young Adult Ministry, Sister 2 Sister Ministry, Men’s Ministry, Prison Ministry, Audio/Visio Ministry, Youth Ministry, Health/Wellness Ministry, Marriage Ministry, Good New Crew Ministry, and Intercessory Prayer Ministry. His mantra that has been received with unity among members is, “Mount Zoar is a church where LOVE is a priority.” This love and God’s guidance have boldly led the Church in the purchase of 7 acres where the church is currently under construction.

In 2018 he received his doctorate of Divinity from the Wilbur H. Waters School of Religion. Pastor Isaac is not only a teacher at this fine institution but also serves as its first Vice President and Dean of Administrative Affairs.

Dr. Isaac retired from the Federal Government after 36 years of service as Director of the Financial Operations Division at the General Services Administration.  He worked for the Chief Financial Officer where he was responsible for the accounting treatment of a $9 billion budget. He received the highest achievement awards and was honored by the GSA, PBS Commissioner for exemplary performance and significant contributions to have ten Native Pine, Fir and Cedar Trees planted in his name at the Shasta-Trinity National Forest.

He is an avid supporter of St. Jude Hospital. Having his own personal challenges with cancer, Dr. Isaac understands the power of prayer and the magnitude of support. In 2014 he was diagnosed with multiple myeloma, a rare blood cancer related to lymphoma and leukemia. He boasts about how the Master of the Universe has shown up in his sickroom through chemotherapy, bone marrow transplants and countless bouts with sicknesses since his diagnosis. Pastor Isaac is passionate about helping people to understand that, “they can have cancer but not let cancer have them!” He professes with absolute certainty that what- ever state one might find him or herself in, he or she should serve the Lord with gladness!